Handbook-gate: Defending the doctrine of Christ against the Church 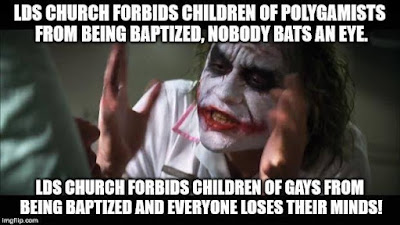 For one thing, I'm troubled over the fact that I haven't thought twice about how this policy has been in place for muslim children and children of polygamists a long time. Maybe I should've reacted earlier. We all need to speak up for the weak, and not just the weak people of our choosing, but everyone that needs an advocate. That's why this meme is relevant.

I will try to address a few of the aspects that are disturbing in all of this. At the end, I will address what's, to my mind, is most serious for a Church called by the name of Christ.

I understand why there wasn't a big press release. It's said to be a clarification that only led to a change in Handbook 1, a handbook most members don't even know exists. I don't know how they thought this would be received, but it seems clear that they didn't consider the risk that someone would leak it on the Internet. How anyone can underestimate the Internet in the year 2015 is amazing. T's equally unfathomable that anyone can overestimate the loyalty among employees in the COB or among leaders in bishoprics and stake presidencies in this day and age.

Instead of owning the situation, the Church is now involved in heavy damage control, and I fear that the credibility of the Church isn't what it used to be and never will be.

The quest for polygamy revisited - this time reversed!

My thoughts are brought back to the 1880's (or to what I've read about it). The Church did all it could to present polygamy as an essential part of the religion. In the end, the Church had to back down and stop practice it (even though the doctrine of plural marriage is very much in force). Today we see the same thing happening, but in reverse. We now do everything we can to keep people out of (our definition) of marriage.

This was shared on a Facebook-group. I don't know who wrote it (if you come around to read this, I hope you accept my apologies for borrowing your analysis.)


If anyone is wondering why the LDS church is taking this stand against same sex couples and their children, the answer is very simple: Dallin Oaks has been obsessed with religious freedom and the legal and theological infrastructure to support it. Oaks is in the background orchestrating a legal strategy to preserve the church's right to refuse to perform same sex marriages. If the church were to perform all other ordinances except marriage for same sex couples and their children, it could theoretically create a contextual precedent that would weaken the church's religious freedom to refuse to perform same sex marriages. That's why the church also included a statement that same sex marriage constitutes apostasy from the church. The LDS church is making a clear line of demarcation so that the church's position from cradle to grave is unmistakable and clear. This is a space where religious freedom and civil liberties collide. The church is bolstering its legal defense against the individual's right to a same sex marriage (in any church). It's a strategy against a long-term threat--a potential threat against the nature of the Mormon temple ceremony, which is the core of Mormon religious life.

Elder Christoffersen was clear - this is not the result of inspiration from God! How can I say that? Well, for one, he never claimed it was. If no one claims that the Lord was involved, I won't assume that He was. This approach isn't widely accepted. Many members, who have defended the Church, say, in substance, the following:


Since my testimony that Thomas S. Monson is a true prophet of God is firm I have a testimony that he, and the apostles, are called of God, and that they speak for God. I don't need to know anything else. With this testimony, I feel peace that the leaders will lead the church according to God's will, not man's. Against this backdrop, there is no need to re-evaluate my testimony every time an issue arises because my testimony was established ages ago. We have been promised that God will not allow his prophets to lead us astray. I pray that I will be wise instead of learned.

In the last days the wheat will be separated from the tares.

Our leaders are human. I won't let this fact shake me. Nor will I be shaken by any new policy or counsel from church leaders.

As a youth I learned that when the light has moved from me, I'm the one who moved. It is my responsibility to look inside myself to get back to the light.

If new policies, or any kind of guidance, rubs me wrong, I know that what I need to do is pray for peace and understanding, pray that the Lord will help change my heart.

In my mind, this is an attitude that is prevalent in today's Church and totally contrary to what elder Charles W. Penrose said in 1882. In my view, it's problematic.


President Wilford Woodruff is a man of wisdom and experience and we respect and venerate him; but we do not believe his personal views or utterances are revelations from God; and when ”Thus saith the Lord” comes from him, the Saints investigate it; they do not shut their eyes and take it down like a pill. When he brings forth light they want to comprehend it. Light, truth, intelligence, wisdom, progress, growth all the time - that is ”Mormonism” - to grow in grace and the knowledge of the truth. […] The Latter-day Saints are not blindly led by leaders or blindly directed by priests; but every man can receive the divine testimony in his own heart and be a priest in his own house. – Charles W. Penrose, Millenial Star 54:191

There are more quotes to the same effect.

People are permitted to assume that whatever comes from the COB is the word and will and mind of God and as good as, or even better, than scripture. This could be considered as dishonest. And if it is, it's serious.

All are equal before God, but some are more equal than others

If we truly want children to not experience conflicting messages between Church and the home, thy don't we ban the use of TV,video games, the Internet and so forth. And why are the children of same-sex couples even allowed to visit Church (in reality, you don't have to be baptized in order for you to hear what's taught)? And when will the Church charge the home teachers to go into full surveillance of their families? I mean, we don't want the kids to hear one thing at home and something else in Church. If this policy is to be taken to its extreme, we are headed for Big Brother: Mormon Edition!

The destruction of Article of faith #2

Not being allowed to receive the "saving" ordinance of baptism is, in my mind, equal to being punished. If this is done because of the sins of your parents, I'd almost consider it evil (at least medEVIL).


We [used to?] believe that men will be punished for their own sins, and not for Adam’s transgression. - Joseph Smith in the Wentworth Letter

This change should have been brought up in General Conference for the sustaining by Church members.

The thought of original guilt is actually about Adam and Eve. Still, the thought resurfaces every now and then. Regretfully it seems to have taken hold of the Church in a modified version.

The denial of the doctrine of Christ

This is the most important in my mind.

What is the gospel of Jesus? What is his doctrine? Later in the same chapter, He answers this question himself.


Now this is the commandment: Repent, all ye ends of the earth, and come unto me and be baptized in my name, that ye may be sanctified by the reception of the Holy Ghost, that ye may stand spotless before me at the last day. Verily, verily, I say unto you, this is my gospel; (v. 20-21; read v. 13-21 for the longer explanation)

Jesus taught the same thing when he first came to the Nephites.
Behold, verily, verily, I say unto you, I will declare unto you my doctrine. And this is my doctrine, and it is the doctrine which the Father hath given unto me; and I bear record of the Father, and the Father beareth record of me, and the Holy Ghost beareth record of the Father and me; and I bear record that the Father commandeth all men, everywhere, to repent and believe in me. And whoso believeth in me, and is baptized, the same shall be saved; and they are they who shall inherit the kingdom of God. And whoso believeth not in me, and is not baptized, shall be damned. Verily, verily, I say unto you, that this is my doctrine. (3 Ne 11:31-35)

He then added this most important warning.

I dare to say that no one is exempt from this warning. Not the Pope, not your home teachers, not the Bishop, nor the First Presidency or the Quorum of the Twelve Apostles.

This is the chance for us all to root ourselves even more firmly on the rock of our Redeemer, for he alone is might to save.
Posted by Christian at 1:07 PM